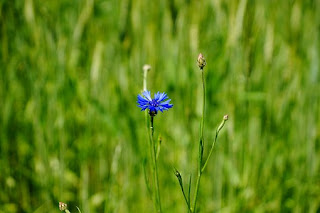 Key Verse: Verse 40 - “Let thistles grow instead of wheat, and cockle instead of barley. The words of Job are ended.”

You may not have heard of the cockle. It is only mentioned once in the Word of God. It is not a very large plant; it only grows to approximately eighteen inches high.

The cockle is also known as the stench plant. When the cockle is crushed, it puts off a rank odor. It taints the milk and the meat of grazing animals.

The cockle is a lot like bitterness. It causes a big stink and defiles many.

One of the most powerful pictures of the embittered heart is seen in Herman Melville’s character, Captain Ahab, in Moby Dick. In a violent confrontation at sea, the great white whale dubbed Moby Dick had sliced off Ahab’s leg. Ahab had been carried to his bunk in the bowels of the ship; and there he lay, clinging to life, leg absent, during the return voyage.

“…for long months of days and weeks, Ahab and anguish lay stretched together in one hammock, rounding in mid winter that dreary, howling Patagonian Cape; then it was that his torn body and gashed soul bled into one another; and so interfusing, made him mad.”

Ahab was eventually fitted with a peg leg, but there was no prosthesis for the soul. Obsessed with hate, Ahab set his face to search out and destroy Moby Dick, whatever the cost. He fitted a ship, hired a crew, and mounted a voyage of vengeance, which led to his death, the destruction of his ship the “Pequod,” and the loss of all his men except Ishmael, who lived to tell the tale.

Do not let bitterness destroy you; and do not be like the cockle plant, causing a stink wherever you go.

What to do:
✞ Ask God to keep you from becoming bitter. The only alternative is to stink up the place when you are.