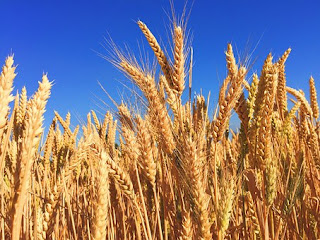 Key Verse: Verse 23 – “So she kept fast by the maidens of Boaz to glean unto the end of barley harvest and of wheat harvest; and dwelt with her mother in law.”

Key Words: to glean unto the end of barley

Did you know that barley is a member of the grass, or poaceae family, and is primarily a cereal grain? It was once one of the only major staple food sources in Israel.

There are various types of barley available, which include whole barley, hulled barley, pearled barley, as well as barley flakes. Barley contains copper, phosphorus, and zinc. It is also rich in fiber and has been known to lower high blood cholesterol. Barley also contains calcium and iron. It contains zero fat and zero cholesterol.

If you will remember in John 6:9-10, in the story of the lad with five loaves and two fish, the loaves of bread were five barley loaves. Barley was known as the bread of the poor. The point being that God can use even the poor and lowly to accomplish His will when they surrender their lives to Him. The answer for the poor is not bread, but Jesus.

A little over a century ago, Leo Tolstoy tried puzzling out a plan to rid Moscow of the poor and homeless. The famed novelist and wealthy aristocrat first went to the worst hovels in town and gave money to beggars. He realized, however, that he had been “cheated by men who said they only needed money to buy a railway ticket home” when he would spot them still in town days later. Next, Tolstoy spent several months helping take the Moscow census, searching for the “truly” needy. But Tolstoy saw the homeless could not be helped merely by “feeding and clothing a thousand people as one feeds and drives under shelter a thousand sheep.” At last, he sadly concluded, “Of all the people I noted down, I really helped none… I did not find any unfortunates who could be made fortunate by a mere gift of money.” Jesus truly is the answer. As we meet the physical needs of the homeless, let us give them the bread and water of life, which will truly set them free.

The next time you see barley bread, think of how Jesus can use you if you will only surrender your will to do His will.

What to do:
✞ Remember that barley is the poor man’s bread, and the next time you see or eat barley bread, remember that God can use you.