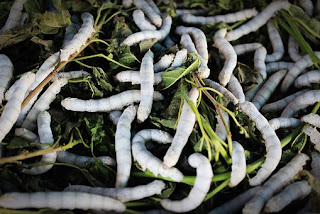 Key Verse: Verse 31 – "But the men that went up with him said, We be not able to go up against the people; for they are stronger than we."

Key Words: We be not able to go up against the people

Problems are nothing more than an opportunity for improvement.

In 2700 B.C. Emperor Whing Tee asked his wife Ce Ling Shee to try to find out what was damaging his mulberry trees. The Empress first noticed that a drab-colored moth was laying tiny eggs on a mulberry leaf, each hatching into a caterpillar that ejected a thread for three days which it wrapped around its body until it formed a cocoon. She dropped the cocoon into hot water and saw a single thread begin unwinding itself. She had discovered silk. The Empress observed the fineness and beauty of the silk thread. She unbound it completely and found it to be ½ mile long from that single cocoon. And she thought that these fine threads might be made into cloth.

Soon a loom was developed on which they could be woven. That silk cloth that was woven on their loom was in such demand that later Romans are said to have weighed the silk before buying it and then paid an equal weight of gold for it.

For more than 3000 years only the Chinese knew the secret of silk. Then in A.D. 522 Roman Emperor Justinian sent two monks to buy silk from China. The monks brought back more than silk. They personally broke the Chinese monopoly on silk by smuggling back into Europe two silkworm eggs and mulberry tree seeds in their hollow monks’ staff. They were apparently the first industrial pirates. From these two silkworm eggs the Roman Empire acquired enough silkworms to make it partially independent from China.

Like so many serendipitous events, the discovery of silk came while trying to solve a problem. Before long the business of growing mulberry trees was for the sole purpose of providing moths with leaves on which to lay their eggs so that the production of silk could be increased.

Nothing like silk had ever appeared before in fine fabrics. It brought about a world of revolution in fashions. The very word silk brings to mind something that is soft, lustrous or luxurious. The wealthy of the world have always dressed themselves in silken clothes.

It’s important to look for solutions instead of trying to avoid problems, so when you have a problem of some kind, remember that you also have an equal opportunity.

What to do:
✞ Remember, problems are nothing more than an opportunity for improvement.