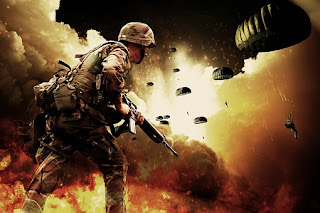 Key Verse: Verse 7 - "The LORD is good, a strong hold in the day of trouble; and he knoweth them that trust in him."

Key Words: a strong hold in the day of trouble

During times of adversity we cry out to God; but when the adversity passes, we fail to remember our cry.

The night before they were to attack the German lines, a hundred men wrote letters home. The chaplain, whose duty it was to censor the letters, put them in a mail pouch until after the battle. When the battle was over, the men again wrote home, telling of their ordeal. The overburdened chaplain had both sets of letters to censor.

Here is a sample of what he read before the battle: “Dear Mother, we’re going to attack in the morning and I’ve been thinking of home and you, and I vowed to God that if I come through tomorrow, I am going to be a better man.” Some even said, “I believe I’m going into the ministry.”

But after the battle, in the same handwriting, three days later, to a friend in another regiment: “Dear Joe: Can you get leave? The last time we were in Paris, we had a hot time, didn’t we? I’ve just come through a scorcher up front, and we were near death at every moment. If you can get leave and meet me in Paris, boy, we’ll go out on the town!” Before the battle: “Oh, God, if I get through tomorrow!” After the battle: “Well, I got through, God, so I don’t need you anymore.”

For many people God is a very present help in time of trouble; but let the trouble pass, and God moves out of the picture. And there are many people who, when they are sick, cry out, “Oh, God!” but when they get well, “Oh, me!”

What to do:
✞ Never forget the same God Who delivers from adversity also allows it.