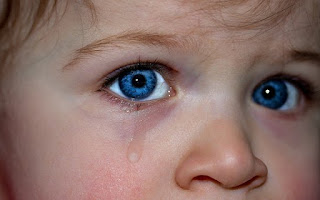 Key Verse: Verse 5 - "For his anger endureth but a moment; in his favour is life: weeping may endure for a night, but joy cometh in the morning."

There are some questions in regard to the background of this particular psalm, but whatever the occasion, the psalmist writes in the midst of adversity about the joy of tomorrow. Reminds me of a story I read about tough days.

We all have those tough days. Some are worse than others. Like the one the hard-hat employee reported on his accident form when he tried to be helpful:

“When I got to the building I found that the hurricane had knocked off some bricks around the top. So I rigged up a beam with a pulley at the top of the building and hoisted up a couple barrels full of bricks. When I had fixed the damaged area, there were a lot of bricks left over. Then I went to the bottom and began releasing the line. Unfortunately, the barrel of bricks was much heavier than I was – and before I knew what was happening the barrel started coming down, jerking me up.

I decided to hang on since I was too far off the ground by then to jump, and halfway up I met the barrel of bricks coming down fast. I received a hard blow on my shoulder. I then continued to the top, banging my head against the beam and getting my fingers pinched and jammed in the pulley. When the barrel hit the ground hard, it burst its bottom, allowing the bricks to spill out.

I was now heavier than the barrel. So I started down again at high speed. Halfway down I met the barrel coming up fast and received severe injuries to my shins. When I hit the ground, I landed on the pile of spilled bricks, getting several painful cuts and deep bruises. At this point I must have lost my presence of mind, because I let go of my grip on the line. The barrel came down fast – giving me another blow on my head and putting me in the hospital.

Tough days...yes, we all have them; but hold on, my child, joy comes in the morning.

What to do:
✞ Trust in the Lord with all your heart; yes, even during the trying days of life.