Daily Devotion: How Will It End? 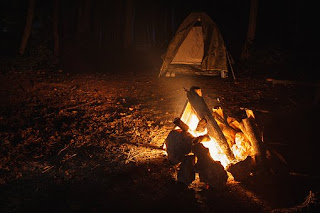 Key Verse: Verse 18 – "Then said she, Sit still, my daughter, until thou know how the matter will fall: for the man will not be in rest, until he have finished the thing this day."

Key Words: how the matter will fall

Ruth was wondering how the situation with Boaz was going to end. What’s going to happen? Naomi gave her the Biblical admonition to “sit still.” In other words, wait! Be patient.

I am reminded of the fact that patience -- waiting on God to act, or move others to act – is indeed a virtue.

According to a traditional Hebrew story, Abraham was sitting outside his tent one evening when he saw an old man, weary from age and journey, coming toward him. Abraham rushed out, greeted him, and then invited him into his tent. There he washed the old man’s feet and gave him food and drink.

The old man immediately began eating without saying any prayer or blessing. So Abraham asked him, “Don’t you worship God?”

The old traveler replied, “I worship fire only and reverence no other god.”

When he heard this, Abraham became incensed, grabbed the old man by the shoulders, and threw him out his tent into the cold night air.

When the old man had departed, God called to his friend Abraham and asked where the stranger was. Abraham replied, “I forced him out because he did not worship you.”

God answered, “I have suffered him these eighty years although he dishonors me. Could you not endure him one night?”

Ruth did wait -- and the rest of the story is that now Ruth and Boaz are in the lineage that brings forth the Messiah—our Lord and Savior Jesus Christ.

What to do:
✞It really does pay to wait – sit still.