Daily Devotion: How and the Truth 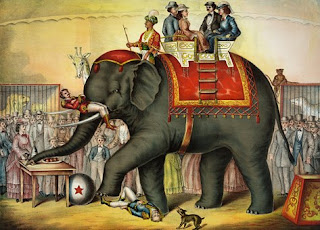 Key Verse: Verse 15 – "And the king said to him, How many times shall I adjure thee that thou say nothing but the truth to me in the name of the LORD?"

Key Words: How many times shall I adjure thee

What an odd couple Jehoshaphat and Ahab made teaming up to fight against the Syrians. So they inquired of the prophets, four hundred of them, who told them to go up and fight. But one, Micaiah, prophesied for them not to go, and that if they did, then Ahab would die. Ahab’s response was that Micaiah never prophesied any good thing for him. However, in verse 14, Micaiah joins the other four hundred and says to go ahead and fight. Ahab’s response is found in verse 15. “And the king said to him, How many times shall I adjure thee that thou say nothing but the truth to me in the name of the Lord?”

A woman’s red station wagon was crushed by an elephant at a circus. The owners of the animal apologized, explaining that the animal, for some reason, simply liked to sit on red cars. In spite of the damage, the woman’s car was still drivable. On the way to the garage she was stopped short by an accident involving two other cars just ahead of her. When the ambulance arrived a few minutes later, the attendants took one look at her car, then ran over to assist her.

“Oh, I wasn’t involved in this accident,” she explained. “An elephant sat on my car.” The ambulance attendants quickly bundled her off to the hospital for possible shock and head injuries despite the lady’s vehement protests.