Daily Devotion: When of the Flood 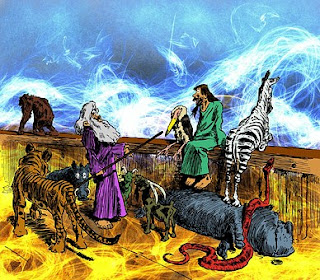 Key Verse: Verse 6 - “And Noah was six hundred years old when the flood of waters was upon the earth."

Key Words: when the flood of waters was upon the earth

I remember a summer day that began bright and sunny, but muggy and uncomfortable. The weatherman predicted storms, but when one looked outside, it was hard to believe it would happen. By 3:00 in the afternoon, things had changed drastically. The air was so humid you felt you would drown just walking through it. The sky in the west was turning ugly. Huge dark clouds were rolling in and soon the sun was totally obliterated. It was almost as dark as night, but it was late afternoon. Suddenly the clouds burst and huge drops of rain began to fall. Lightning flashed through the heavens and the house seemed to vibrate with each crash of thunder. The rain was so heavy you couldn’t see the field across the road. Rivers of water ran down our driveway into the backyard. There was a loud crack and our power went off. No more electricity for awhile. We sat in darkness waiting for the storm to pass over. Little by little the rain began to let up, the clouds lightened and the sun came out, its rays glistening in the light rain that still fell. “Look! Over the barn, do you see it?” Sure enough, there it was---a rainbow. We went outside, standing in the drizzle to see it better. As we watched, the colors became brighter and brighter. It was beautiful. Then, just as we thought it couldn’t get any better, a second rainbow appeared over the first, gradually darkening in color like the first. A sense of wellbeing flooded over me. Everything was going to be alright now. We had God’s promise and it was good.

What to do:
✞ Remember every promise in the book is “mine, every chapter, every verse, every line.”