Daily Devotion: The When of Faith 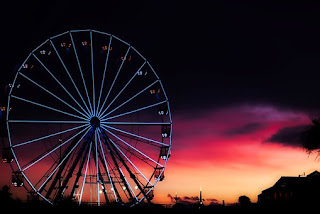 Key Verse: Verse 5 – “When Jesus saw their faith, he said unto the sick of the palsy, Son, thy sins be forgiven thee."

Have you ever considered that there may be those who will never accept Jesus by faith because they never see our faith in action?

It was their faith that brought him to Jesus and I’m convinced at some point the palsied man believed and not only was he healed physically, but was also saved spiritually.

It’s our faith that brings people to the house of God so they can hear the Word of God, and come to accept Jesus as Savior; but it all begins with our faith.

In 1893, engineer George Ferris built a machine that bears his name—the Ferris wheel. When it was finished, he invited a newspaper reporter to accompany him and his wife for the inaugural ride. It was a windy July day, so a stiff breeze struck the wheel with great force as it slowly began its rotation. Despite the wind, the wheel turned flawlessly. After one revolution, Ferris called for the machine to be stopped so that he, his wife, and the reporter could step out. In braving that one revolution on the windblown Ferris wheel, each occupant demonstrated genuine faith. Mr. Ferris began with the scientific knowledge that the machine would work and that it would be safe. Mrs. Ferris and the reporter believed the machine would work on the basis of what the inventor had said. Stop and consider that others may come to Christ because of your faith in Him. In the words of one of my favorite songs, “they saw Jesus in you.”

What to do:
✞ Are you living so others can see Jesus in you?