Daily Devotion: What It Is 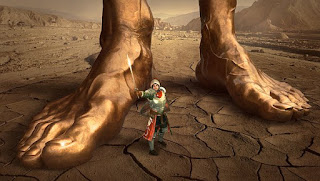 Key Verse: Verse 18 – “And see the land, what it is; and the people that dwelleth therein, whether they be strong or weak, few or many;”

Key Words: And see the land, what it is

Moses sent twelve spies to check out the promised land; to see what God was going to give them. They indeed saw that it was land flowing with milk and honey but their focus was wrong. They focused not on the land but on the giants that inhabited the land. Because their focus was wrong, their faith was weak.

We all know what it’s like to have our car battery go dead. A powerless battery cannot take you anywhere. So you put up the hood of your car and pull out some jumper cables. You get another car whose battery is alive, and get the hood of that car close to yours. Then you take the cables and connect that battery’s positive with your positive and the negative with a metal part on your engine. And then there is a transfer of power and a transfer of life. The living battery sends its life and its power through the cables to your dead battery. Then you can turn on your ignition and know that there has been a transfer of power via the cable. All of a sudden your dead motor turns over. All of a sudden your dead car can now move. Why? Because it has power on its own? No. Because it borrowed power from another. Because it took power from a living battery.

The problem with the twelve spies is that ten of them were living off their own power rather than the power of God. What a shame.

What to do:
✞ If you live off your own power little will be accomplished for God. So live off God’s power.