Daily Devotion: What is Become of Him? 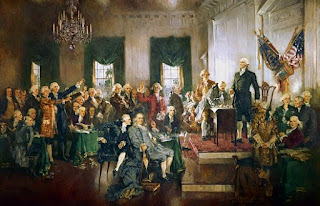 Key Verse: Verse 1 – “And when the people saw that Moses delayed to come down out of the mount, the people gathered themselves together unto Aaron, and said unto him, Up, make us gods, which shall go before us; for as for this Moses, the man that brought us up out of the land of Egypt, we wot not what is become of him.”

Key Words: we wot not what is become of him

When Moses failed to show in what the Jewish people thought was an appropriate amount of time, they began to do their own thing. They made idols, they declared a feast, they ate and drank, and then they played. Without proper guidance and leadership, people will always tend to do wrong.

In America, we have the constitution by which those who lead us and those who are our judges are to lead and render decisions. But as we know all too well that the constitution must be not only obeyed but understood by those in leadership. If not, we are bound to be headed in the wrong direction on a one way street to destruction.

In 1789 an uncertain George Washington is urged to seek the presidency by Governor Morris, a Pennsylvania delegate to the Constitutional Convention. Morris writes Washington: “No constitution is the same on paper and in life. The exercise of authority depends upon personal character. Your cool steady temper is indispensably necessary to give a firm and manly tone to the new government.”

It’s the leader or leaders that will determine in what direction the government, home, business and yes, even the church will go. Yes, we do have God’s word, but it will only guide us right as we obey it.

What to do:
✞ If you are in a position of leadership, lead!! If not, people will ask what has become of him.