Daily Devotion: What Have I Done? 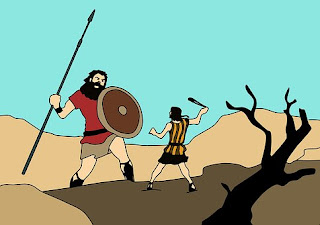 Key Words: What have I now done?

David asked the question, “What have I now done?” in response to his oldest brother’s rebukes. Then David responds, “Is there not a cause?” It was his cause that motivated him.

I’m reminded of a story I heard. It goes something like this. “I’m so depressed and I can’t get any dates,” the 300-pound man told his minister. “I’ve tried everything to lose weight.”

“I think I can help,” said the minister. “Be dressed and ready to go tomorrow at 8 a.m.

Next morning, a beautiful woman knocked on the man’s door. “If you can catch me, you can have me,” she said, as she took off. He huffed and puffed after her.

This routine went on everyday for the next five months. The man lost 115 pounds and felt confident he would catch the woman the next day. That morning he whipped open his front door and found a 300-pound woman in a jogging suit waiting for him. “The minister said to tell you,” she began, “that if I can catch you, I can have you.”

What to do:
✞ Have a Godly cause.