Daily Devotion: Where Were You? 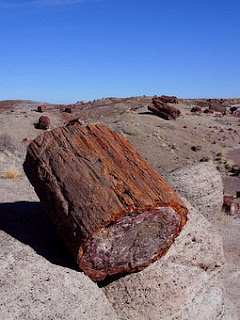 Key Verse: Verse 4 - “Where wast thou when I laid the foundations of the earth? declare, if thou hast understanding."

Key Words: Where wast thou when I laid the foundation of the earth?

Good question for all of the evolutionists! Where were you when the earth was formed?

J. Vernon McGee tells about the time a geologist once took him up to a ridge in northern Arizona — he thought it was a ridge, but it was just sand. He couldn't understand why sand was piled up there. He kicked away the sand and under it was a petrified log. He asked, "My, where did this come from?" He said, "California." Bro. McGee said, "Who hauled it in here?" He answered, "It floated in here."

Now if you look at that Arizona desert, it is hard to imagine that there was ever any water that could have floated that log. But, apparently that is what has happened. That log had floated in from California.

Bro. McGee asked the geologist, "When did that happen?" He said, "Well, about 250,000 years ago." And he said it like he had been there when the log arrived. Now it may be that he was right.

I am saying that there are a lot of folks today who seem to know what took place years ago. How this earth, they say evolved into existence. So we ask the question God asks, "Where wast thou when I laid the foundations of the earth?”

Once I was a tadpole just beginning to begin,
Then I was a frog with my tail tucked in;
Then I was a monkey hanging from a tree;
Now, look, I’m a college professor with a PHD!

What to do:
✞ The choice is yours: believe God – believe man.